Why I am suspicious of the new messiahs of masculinity 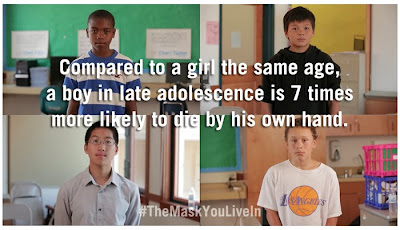 People know I’m interested in men’s issues and so every now and then I get introduced to a “new messiah of masculinity” usually in the form of a YouTube clip that will be pushed my way with the words “you’ll love this”.

You can see this shift in play in Jackson Katz’s popular TED talk that was joyfully shared with me several times this year after Upworthy heralded it as the “talk that might turn every man who watches it into a feminist”.

And therein lies the key problem I have with the “new messiahs of masculinity”, it’s this apparent belief that only feminists can understand gender and therefore to understand gender you have to convert to feminism.

Personally, I’ve tried feminism and found it deeply wanting when it comes to understanding and addressing the many, diverse problems that men and boys face all over the world. That’s why I’m a non-feminist---or at least that’s what I often call myself to distinguish myself from the polarizing binary thinking of “feminism versus anti-feminism”.

In reality, I’m an integralist. I find the integral approach to gender to be the most powerful and effective way of understanding the complexity of 21st Century gender issues and finding effective solutions.

As an integral thinker I try to seek out the truth and validity of the many different ways of viewing gender and can find partial truth in most approaches. I’m committed to helping create a world that works for everyone and part of my contribution is to help people who have different worldviews to better understand each other---particularly when it comes to gender (and particularly when it comes to men’s issues).

I’m always keen to find new voices in the world of men’s issues and also suspicious of what I call the “new messiahs of masculinity”.  The latest “new messiah” to keep landing on my social media timeline this month is the film-maker Jennifer Siebel Newsom from San Francisco who’s raised $100,000 to help make a documentary on American masculinity called  “The Mask You Live In”.

From the trailers it looks like being a great contribution to the global discourse on gender. It talks about the “boy crisis”, how boys are more likely to fail in education, kill themselves, binge drink, be diagnosed with a behaviour disorder and so on.

These are the types of issues that the proposed White House Council on Boys and Men have been lobbying on for several years now. I’d encourage you to take a look at the impressive list of experts who support the council and then look at the shorter (but also impressive) list of people supporting Newsom’s film.

One thing you may notice is there is no overlap between the two lists. The reason for this is that Newsom’s list is predominantly pro-feminist and the proposed White House Council on Boys and Men is predominantly non-feminist. From what I’ve heard, the proposed council keeps making progress up the political hierarchy only to be blocked by feminists---I don’t know how true this is but from my experience of how policy on gender issues tends to work it wouldn’t surprise me, knowing how strongly the belief that “only feminists understand gender” issues is held.


You can find these issues subtly at play in the trailer for Newsom’s film.

Listen to the opening sequence of the trailer. Listen to all the voices that are telling men to “man up” etc---every single voice is male. It’s a subtle message that men and masculinity are the problem that’s being addressed by this film----despite the fact that more women than men are involved in raising boys as parents and teachers; despite the evidence that women are the main perpetrators of adult violence and abuse against boys in U.S.A; despite the evidence that around half of all the domestic violence that boys in the U.S.A. are exposed to growing up is committed by their mothers against their fathers; despite the fact that the boys this film is focussed on are more likely to have been sexually abused than be sexual abusers----despite all of that, the underlying message of the short trailer is men and masculinity are the problem.

As Joseph Lamour says of the film on Upworthy, "it's time we make changes, starting from within ourselves".

And that quote captures the thinking of the "new messiahs of masculinity". In my view, the problems that men and boys face are located in the systems and cultures that men and women have created together (as well as within our individual selves). The women's movement didn't make its rallying call "let's change ourselves from within", no its rallying call was let's "change the system" and let's "change our culture" and let's "empower women".

The idea of empowering men or of changing the system or our culture to help men and boys thrive is a taboo for the "new messiahs of masculinity" who believe that it's men who already have all the power and therefore men who must change to make the world a better place for everyone---personally I think that's far too much power and responsibility to place on individual men.

Now does this mean Newsom’s film should be ignored? Not at all---it looks, from the trailers, like a fascinating piece of work and I look forward to the project being completed.

And I look at her team of “experts” and see they are all drawn from the school of thought that says men and masculinity are a problem that needs to be fixed. There are great people in the world making a difference for boys, people like Steve Biddulph whose book Raising Boys has been embraced by millions of mothers and fathers as a guide to helping their sons navigate the pathway into adulthood.

The nature of gender politics is such that men like Biddulph and Michael  Gurian (one of the experts on boys in education who sits of the proposed White House Council on Boys and Men) are considered by at least one of Newsom’s experts to be “facile”, because their thinking doesn’t align to the pro-feminist way of thinking about gender.

So I remain deeply suspicious of any group of people who put themselves forward as champions of raising men’s consciousness, when they themselves apparently remain deeply unaware of how narrow and exclusive their own gender politics are.

And anyone who thinks otherwise is --- to misquote the soon to be reformed Monty Python team --- not the messiah, they are a very naughty boy---or in the case of Jennifer Siebel Newsom, a very naughty girl!

IF YOU'D LIKE TO DOWNLOAD A FREE CHAPTER OF MY NEW BOOK "EQUALITY FOR MEN" JUST CLICK HERE NOW TO FIND OUT HOW.
Posted by Glen Poole at 23:49